Bend at your waist.

Hang your head and your arms and dangle like a rag doll.

With each breath let your hands droop a little closer to the floor.

Just hang out for awhile.

You're getting blood to your brain.

One vertebrae at a time.

Until your eyes face forward.

Stretch your arms over your head with one last inhale and exhale and I guarantee...

Bless the beautiful, free, life-giving air,
♥ K.
Posted by Kimberly at 6:08 AM No comments:

Ever listen to the chatter in your head?

For me, there are two distinct voices. One that continually tells me where I'm falling short. (She's a pain in the ass.)

"You'll never amount to anything...blah, blah, blah."
And one that reminds me gently how far I've come. (She's sweet and kind, sitting in a field of wildfowers and no one listens to her.)

"You're perfect just the way you are, sitting here doing nothing, just think happy thoughts."

To choose JOY today, I'm kicking the crank to the curb. And I'm letting the beautiful redhead stay in the field with the flowers.

I need a new voice. One that is ALL me. A voice that is strong, complete, honest, and kind. A voice that tells it like it is with love and inner wisdom. A centering, powerful voice that resonates in my gut, my heart, and my mind.

If you feel pulled by negativity, or aloof and floaty and stuck in unproductive positive thinking, try this:

Hold your hands out with elbows bent at your waist and imagine you are holding the grump in one hand and avoidance in the other.

Now bring your hands together over your heart.

Dissolve these two voices into one clear voice and note the first word that comes to mind.

This simple directive is your guide.

My word today is BOLD.

Let me know what you discover. I'd love to hear.

The Road to Sufficient Excellence

I decided to chart my energy level and mood from highest joy-filled bliss to depths of despair and depression.

I wanted to see where I was when I started to slip.

See if I could catch myself before falling too far. Reroute my thinking. Rewrite my thoughts.

Here's how it went:

I am the purist energy of all the universe. I am exactly where I am supposed to be in this moment. Present moment perfection.

I am blissfully happy, at peace with the world. All is well.

Life floats effortlessly from one blink to the next. I am alive, vibrant me! I have always been one-of-a-kind.

I accept all that is around me. I am whimsy. I am calm. I am beautiful and capable.

I am able to see my path and follow it with confidence.

I set goals and attain them one at a time. Moving forward.

I wipe my tears and stand tall. I can do this.

I find strength and direction to complete small tasks.

It is at this point that I can allow myself no further descent without intervening. Here is where I get out a notebook and pen, or grab chalk and stand before my kitchen board. I write a list of tasks that need doing, and I do them. The movement unsticks me. It shows me that I can accomplish things. Simple tasks. It keeps me hovering above what follows if I ignore my decline.

I sit...unmoving. Fear grips me.

Accept it. Feel the pull. This is who you are.

My way is foggy and obscure. I have myself to blame.

I am not important.

I never do anything right.

I'm a failure. I'm not that smart.

I'll never amount to anything.

Life is pointless. Darkest despair. I am worthless.

So I don't want to depress you with this list!!! If you're feeling low after reading to the end, go back to the beginning and read the good stuff. We ALL have the ability to strap on some imaginary hover shoes and float to higher ground.

We can shift our focus through a deep breath, a gentle rolling of the shoulders, and an easy mantra:

"I am sufficiently excellent at being me."

Many blessings and much love,
♥ K.
Posted by Kimberly at 6:55 AM No comments:

Laughter is the best medicine.


It's better to laugh than cry.

The most wasted of all days is one without laughter.
e.e cummings


Eventually all the pieces will fall into place...until then,
laugh at the confusion,
live for the moment,
and just know everything happens for a reason.

Laughter is the music of the heart.

Laugh your heart out...
Dance in the rain...
Cherish the moments...
Ignore the pain.
Live, Love, Learn, Forgive, and Forget...
Life is too short
To live with regrets
blinkyou.com

Bless yourself with laughter today. Be as outrageously silly and joyous as you dare. Your heart will thank you, your belly will thank you, and even if you let loose in public, and everyone thinks your CRAZY, people will thank you for adding a bit of ludicrousness to their day.
We all need some absurdity now and then.
Truly, laughter is what will save us all. ﻿
A Ha Ha Ha and a Hee Hee Hee to you!
♥ K.
Posted by Kimberly at 7:16 AM No comments:

My daughter clicked this photo not knowing Teeka was licking her lips.

What unexpected moments of joy will you stumble upon today?
Here's hoping each moment holds a crumb of happiness.
Slurp,
♥ K.
Posted by Kimberly at 6:10 AM No comments:

Have you ever tried setting goals?

Writing them down,
breaking them down to manageable steps,
taking those steps on a regular basis
and ultimately achieving that goal???
Yeah.

How'd that work for you? And how close to JOYVILLE were you when you failed to take the steps and instead beat yourself up for once again promising to do what you thought you SHOULD do and falling hopelessly short?

I'm guessing you, as I, were not basking in happiness and contentment.

It's January. The month for setting goals.

This morning I frittered away endless time on the Internet READING about setting and achieving goals. When I realized I was staring blankly as I scrolled, not absorbing anything, I got up. Grabbed my journal and started free writing while walking around the house. Here's what I wrote:

What's the weather looking like in the next seven minutes?
Clear to partly procrastinating into a dense fog of zero movement toward life goal.
What is life goal?
Too many to choose from.
Fluttering around my head like fireflies, buzzing, bugging, never landing.
Catch one in a jar!!
Write them out.
Throw them in the air.
Catch!!
Work on that goal for 7 minutes.

This is what I did. I sat down in the middle of my kitchen and wrote out seven goals on journal paper with three simple actions for each one. Then I tore them out, crumpled them up, threw them into the air, and caught one.

I wrote out my financial goals for seven individual things on seven envelopes, then put a dime in each one. I was in the middle of making a commitment to add a bit of money every day toward these treats and dreams when my phone rang.

It was my boss.

A new opportunity had shown up at work and she wanted me to be a part of it. It could prove to be lucrative.

After the call, I tucked my magical manifesting paper fireflies into a beautiful bag for tomorrow's forecast. I see bright skies ahead!

Give it a try. You never know what could happen. I'd love to hear how it turns out for you

Oh happy day to all,

It's usually better to laugh than to cry. 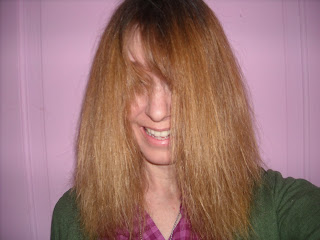 And thank God for teenage daughters and their hair straighteners. What was I thinking back in highschool spending nearly an hour every morning CURLING this mass? It was the 80's. 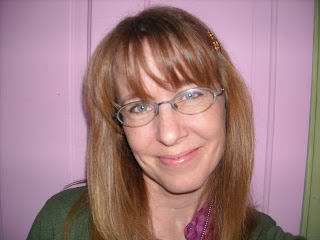 Today's Dose of Joy:
Good hair day!
See you soon gorgeous people! (whether or not your hair's behaving)

"Retreat With Me" is now JOY WINS! As wonderfully fun as it was coming up with retreat ideas and writing about them here, I ran out of steam.

So I'm back with something a little bit different, but really very close to the same.

That's what it's all about. That's what I strive for on a daily basis. And that's what I'm going to share with you.

My retreats were really about finding joy and magic in the every day.

Now, I have license to connect with you in small and great ways regardless of whether I can come up with a new way to meditate, or walk with intention, or sit in a snowbank (reread Week Two~Blue Snow if you don't know what I'm talking about).

And I'm glad to be back.

Stay tuned. ♥ I have much to do. Pictures to take. A blog to redesign. Coffee to drink. Songs to sing.